Raymond van Barneveld has been one of the best darts players in the world for over 20 years. In the 1980s and early 1990s, darts was particularly popular in the United Kingdom. As a foreigner, “Barney” broke the British monopoly on darts, transforming darts into a world sport.

After Raymond’s first official match in 1984, and his many victories in the Netherlands, he made his first appearance in the BDO World Championship in 1991. A dream came true. Unfortunately, it was disappointing performance for him, as he was eliminated in the first round by Keith Sullivan and returned home disillusioned. For Raymond, winning was more important than participating; winning was his motto! But Raymond would have to be patient for a few more years.

In 1993, Raymond returned to the BDO World Championship, narrowly losing out to John Lowe (3-2 in sets) after a victory over Graham Miller. 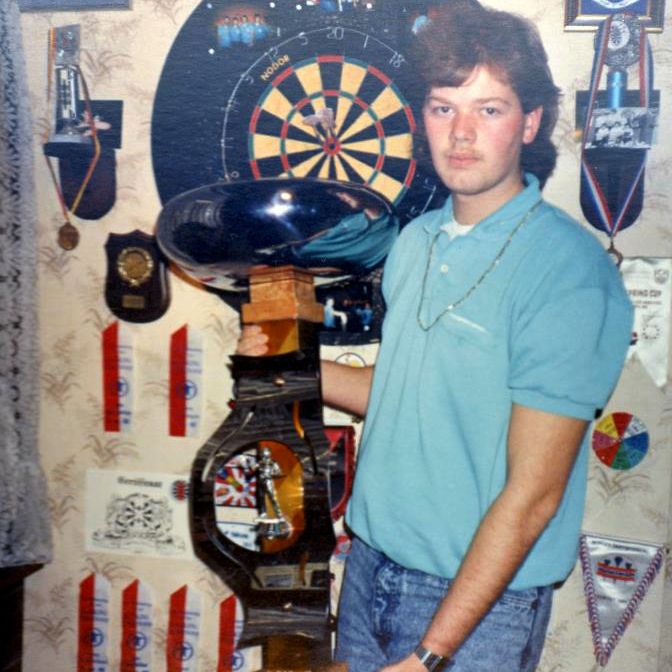 Raymond after winning the Open Rotterdam 1984. 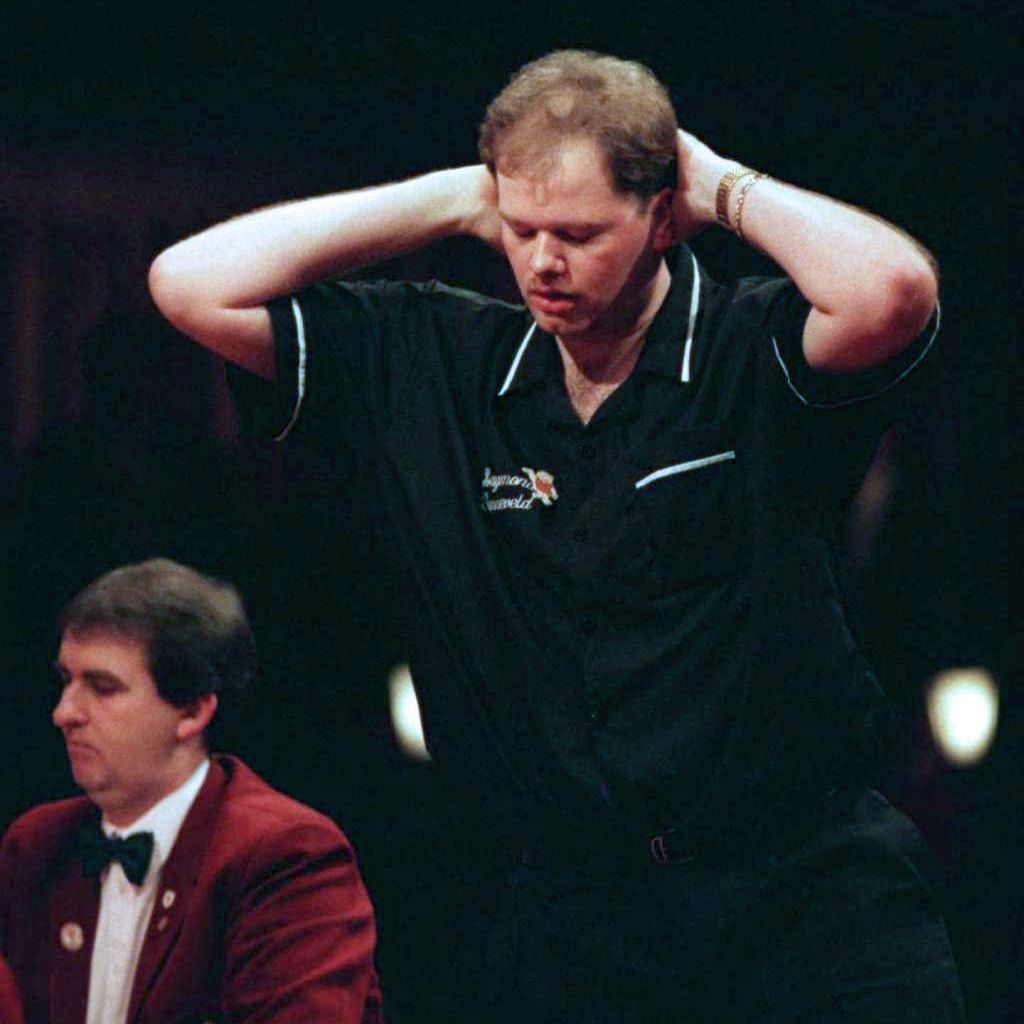 In 1995 he achieved his big international breakthrough by qualifying once again for the BDO World Championship. This time Raymond reached the Final after victories over Les Wallace (3-2 in sets), Dave Askew (3-0 in sets), Colin Monk (4-2 in sets), and Martin Adams (5-4 in sets) before losing in the Final to Richie Burnett (3-6 in sets).

Later that year he became Dutch Champion and won the Finnish Open and European Grand Masters. After many international titles in 1997, Raymond’s life would change again in 1998 when he would reach the Final for a second time after victories over Michael Marshall (3-1 in sets), Andy Fordham (3-2 in sets), Steve Beaton (5-0 in sets), and Colin Monk (5-3 in sets). Once again, Richie Burnett was waiting for him in the Final. After a brilliant match, Raymond hit the D8 to become World Champion and start his race to equal Eric Bristow's 5 World Championships. Afterwards, "Barney" became number one in the world, and from that moment on he would be the favourite for every tournament. 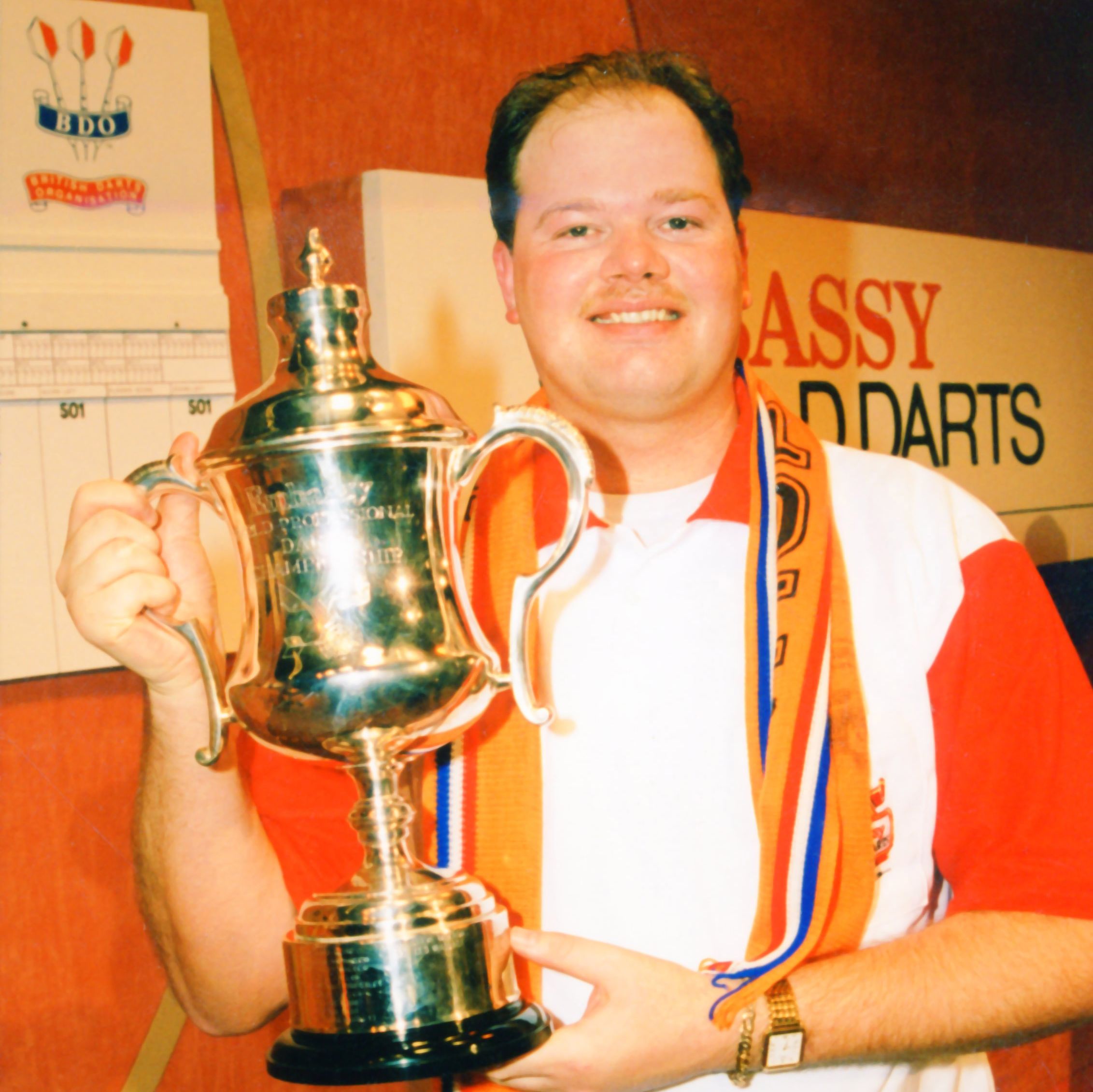 Raymond after winning his first World Title in 1998. 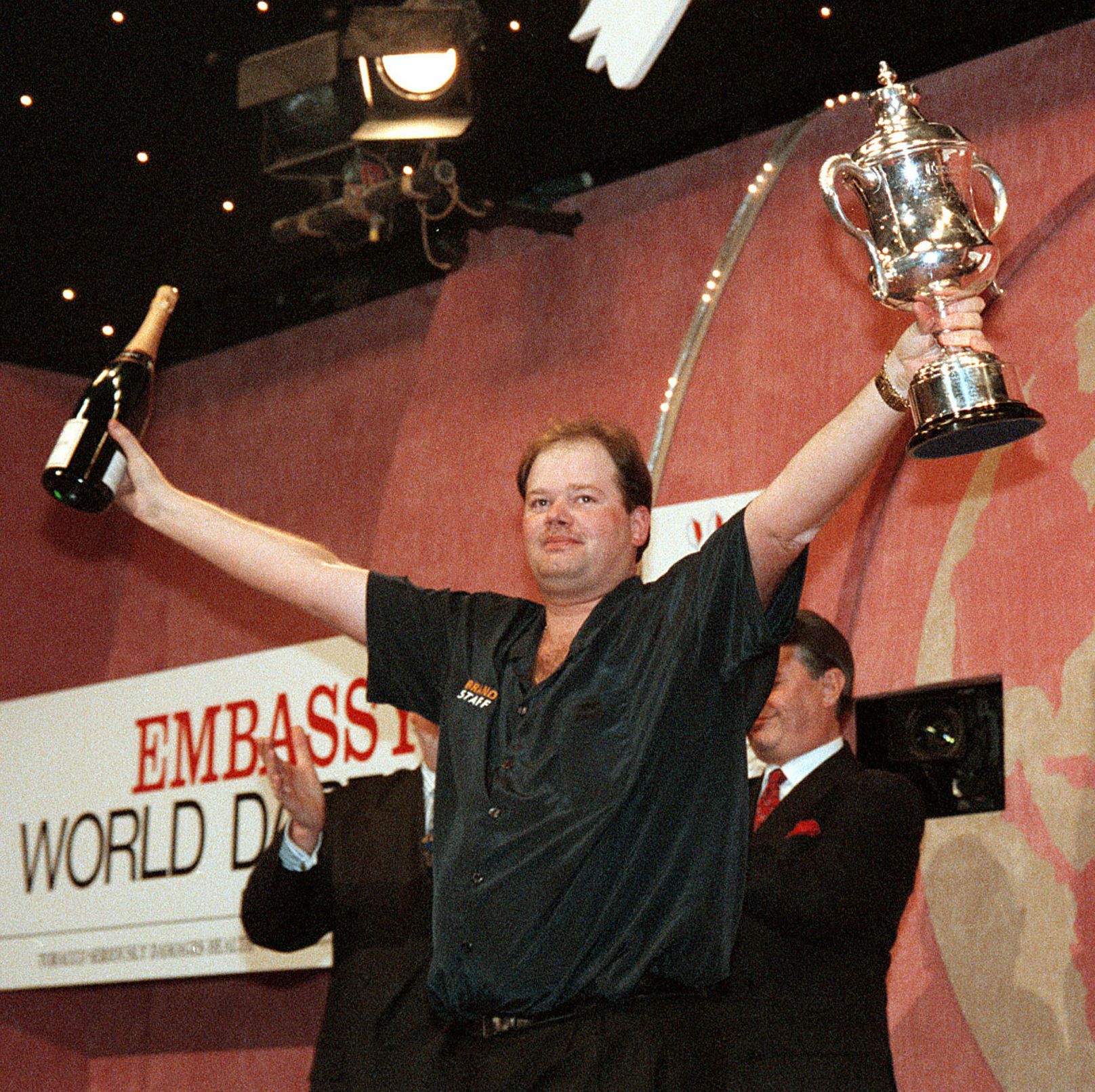 Raymond after defending his first World Title in 1999.

After the BDO World Championship of 1998, there was real hype in the Netherlands. Millions of dartboards and darts were sold, and the Barney-mania was everywhere. It would be the start of an impressive series of victories at home and abroad.

During the BDO World Championship of 1999, "Barney" came to the tournament as the reigning champion. Raymond reached the Final after victories over Sean Palfrey (3-0 in sets), Les Wallace (3-2 in sets), Steve Duke (5-1 in sets), and Chris Mason (5-2 in sets). In the Final, Ronnie Baxter was his opponent. "Barney" defended his World Title to become a two-time world champion after a thriller in 6-5 sets. 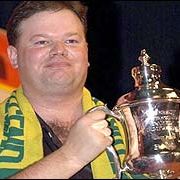 Raymond after winning his third world title in 2003. 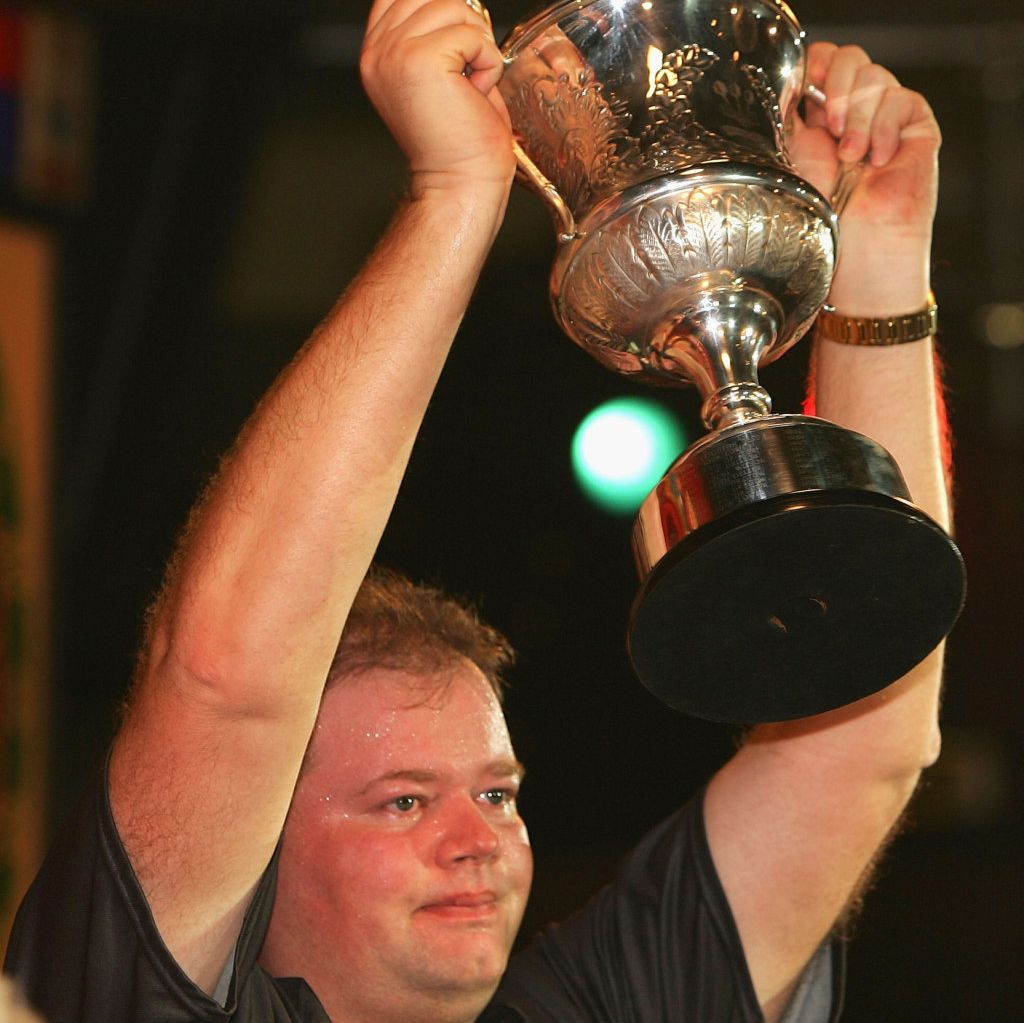 In 2006 Raymond switched to the PDC, the Professional Darts Corporation. The rival of the BDO (British Darts Organization) was founded by professional darts players who wanted to take the sport of darts to a higher level with more television tournaments, more sponsors and more prize money. Raymond also wanted to compete with the world champion of the PDC, the Englishman Phil Taylor.

In his first year with the PDC, Raymond immediately reached the Premier League playoffs and won in the UK Open in his debut year. He made it to the final in Las Vegas, and won several pro tours. One of Raymond's goals was to throw a 9 darter, which he achieved this during the Premier League of 2006, throwing the very first 9 darter in the Premier League and only the sixth televised 9 darter in history. But "Barney" and his army weren’t finished yet.

Based on his performance in 2006, he immediately qualified for the PDC World Championship. Then on January 1, 2007, the time had come: the final against none other than Phil Taylor. Millions of fans in the UK, the Netherlands, and beyond had been looking forward to this.

Raymond and Phil Taylor had 17 World Championships between them, and in one of the greatest matches in darts history, "Barney" came back from 3–0 down in sets to win 7–6 after a sudden-death leg. It was Barneveld's fifth world title overall, and ended a 21-match unbeaten run of Phil Taylor at the PDC World Championships.

Several pro tours, the Premier League 2007 playoffs, Masters of Darts 2007, a finalist in the US Open, again a UK Open 2007 winner, and the Las Vegas Desert Classic. After this, Raymond reached many finals and surprised the darts world by throwing a 9-darter at the PDC World Championship in both 2009 and 2010, an accomplishment that rival Phil Taylor failed to achieve. 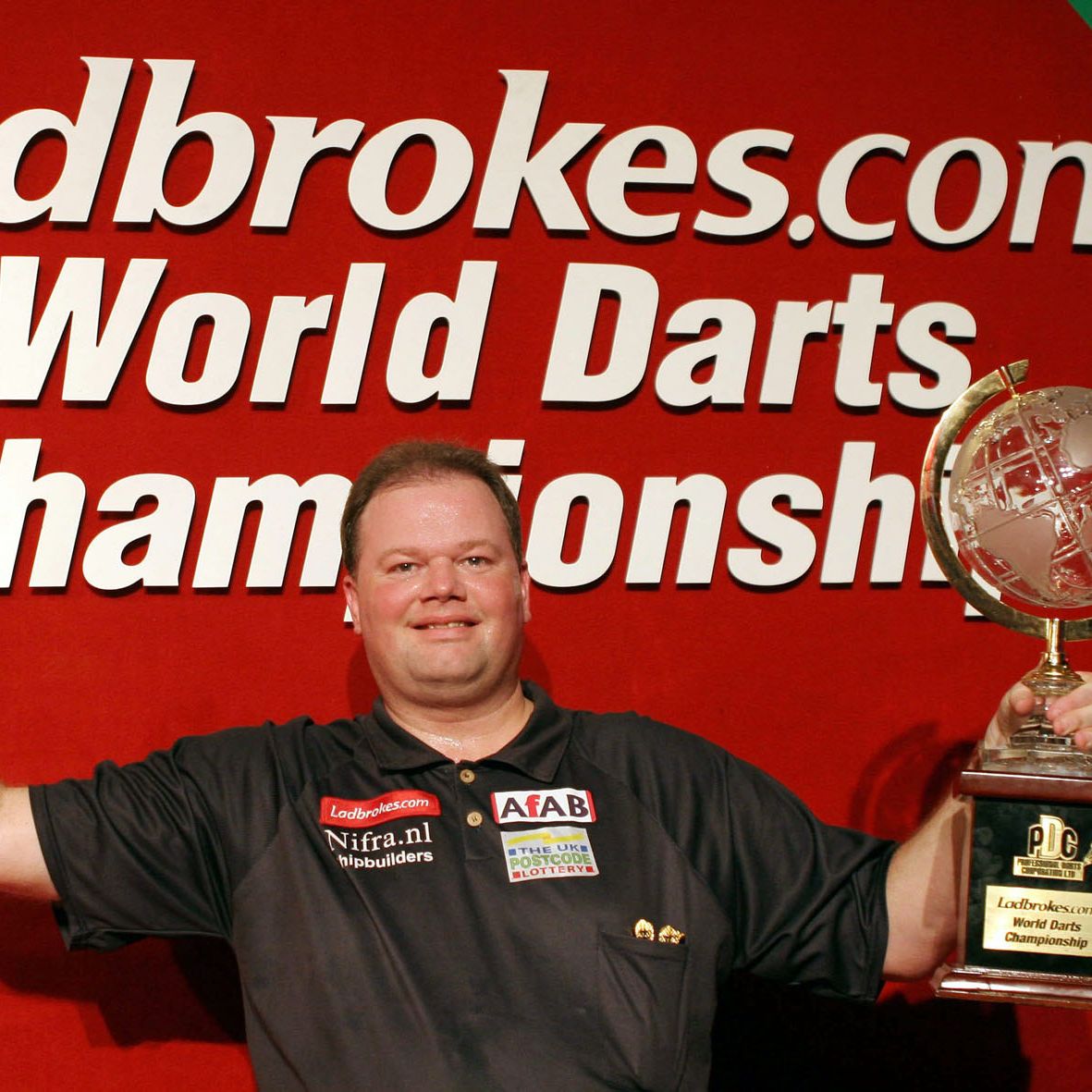 In 2009, after victories over Mark Stephenson (3-0 in sets), Wes Newton (4-1 in sets) with 102.54 average, Ronnie Baxter (4-3 in sets), Jelle Klaasen (5-1 in sets) with 106.68 average, James Wade (6-4 in sets), Raymond reached the PDC World Championship Final once again, but would lose to an unleashed Phil Taylor. Later that year, "Barney" reached the finals of the Desert Classic and World Grand Prix, losing out to Phil Taylor.

In the Grand Slam of Darts Final, nerves almost got to him. After missing the D20 narrowly, Raymond threw the second dart in the big five. Michael won the leg, but Raymond showed what made him a five-time world champion. Michael started with a 140 and Raymond equaled. Michael hit 97, and Raymond took control of the leg with a 138. Michael hit a 57, and full of adrenaline, Raymond hit 177, showing his class. "Barney" had 46 left after nine darts thrown and only needed two darts to finally end his trophy drought.

In 2015, Raymond reached the PDC World Championship Semi-Final, losing out to Phil Taylor, and also made the final of the Auckland Darts Masters.

In 2016, Raymond played one of the greatest matches on the PDC World Championship stage against Michael van Gerwen. "Barney" won a thriller 4-3 in sets with an average of 100.44, while Michael averaged 105.78, the highest losing average at that time. Raymond reached the Semi-Final once again but ran out of steam against Adrian Lewis.

In 2017, Raymond reached the Semi-Final of the PDC World Championship for the third time in a row. Before defeating his biggest rival in the Quarter-Final, Phil Taylor, 5-3 in sets. In the Semi-Final "Barney" lost to Michael van Gerwen (6 - 2 in sets). "Barney" averaged 109.34, while Michael averaged 114.05. Later that year, Raymond would reach the final of the Perth Darts Masters. 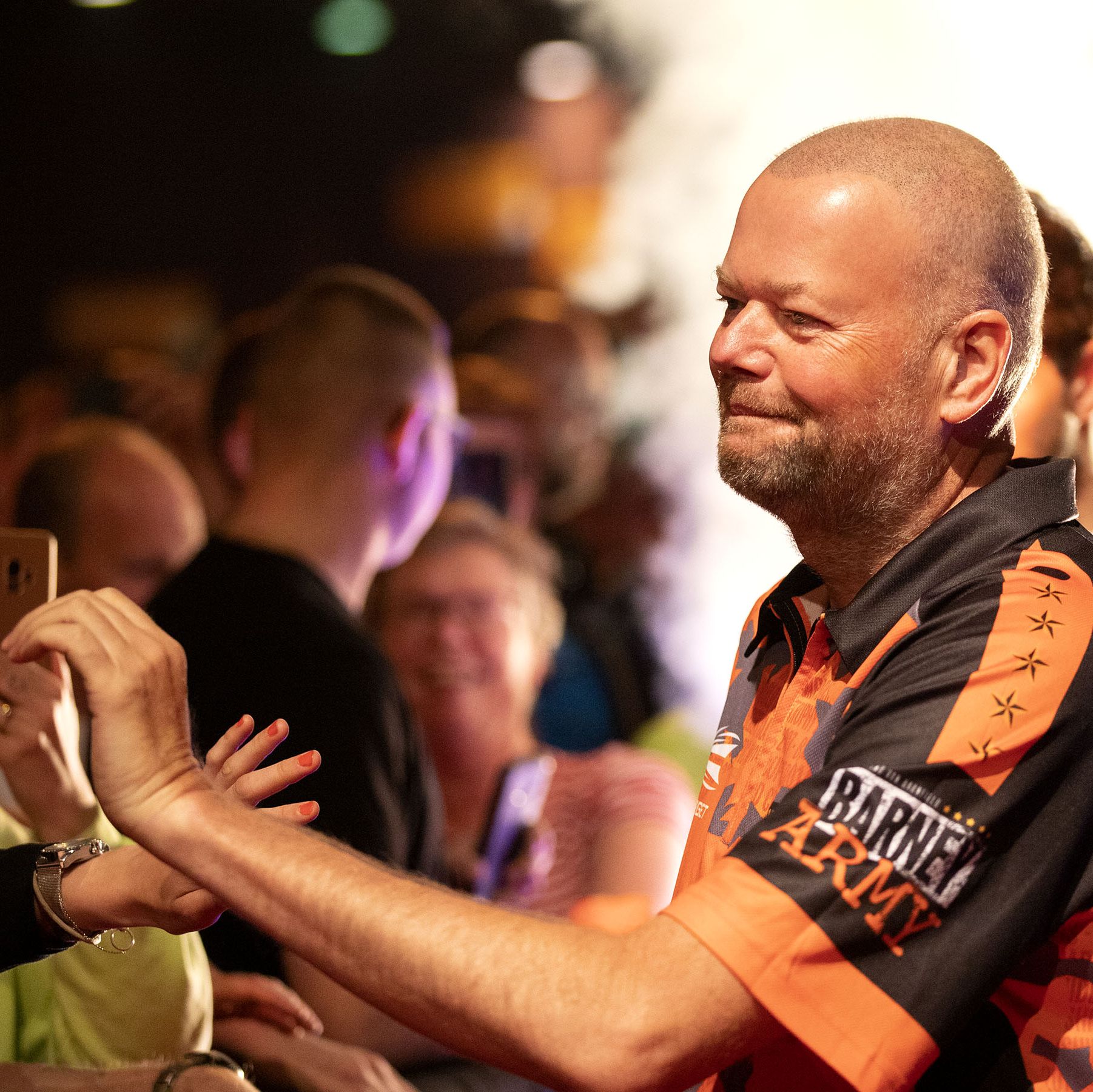 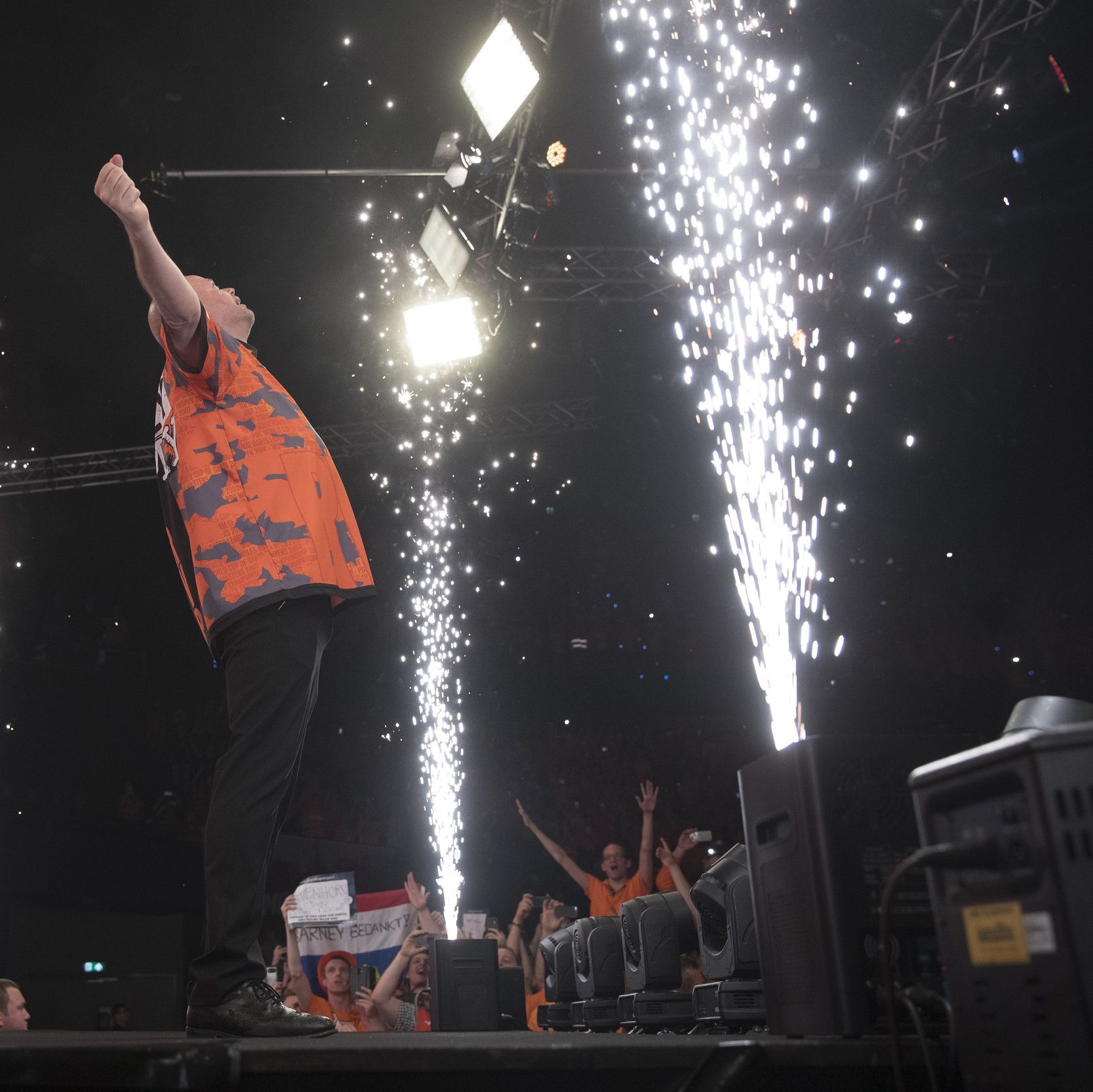 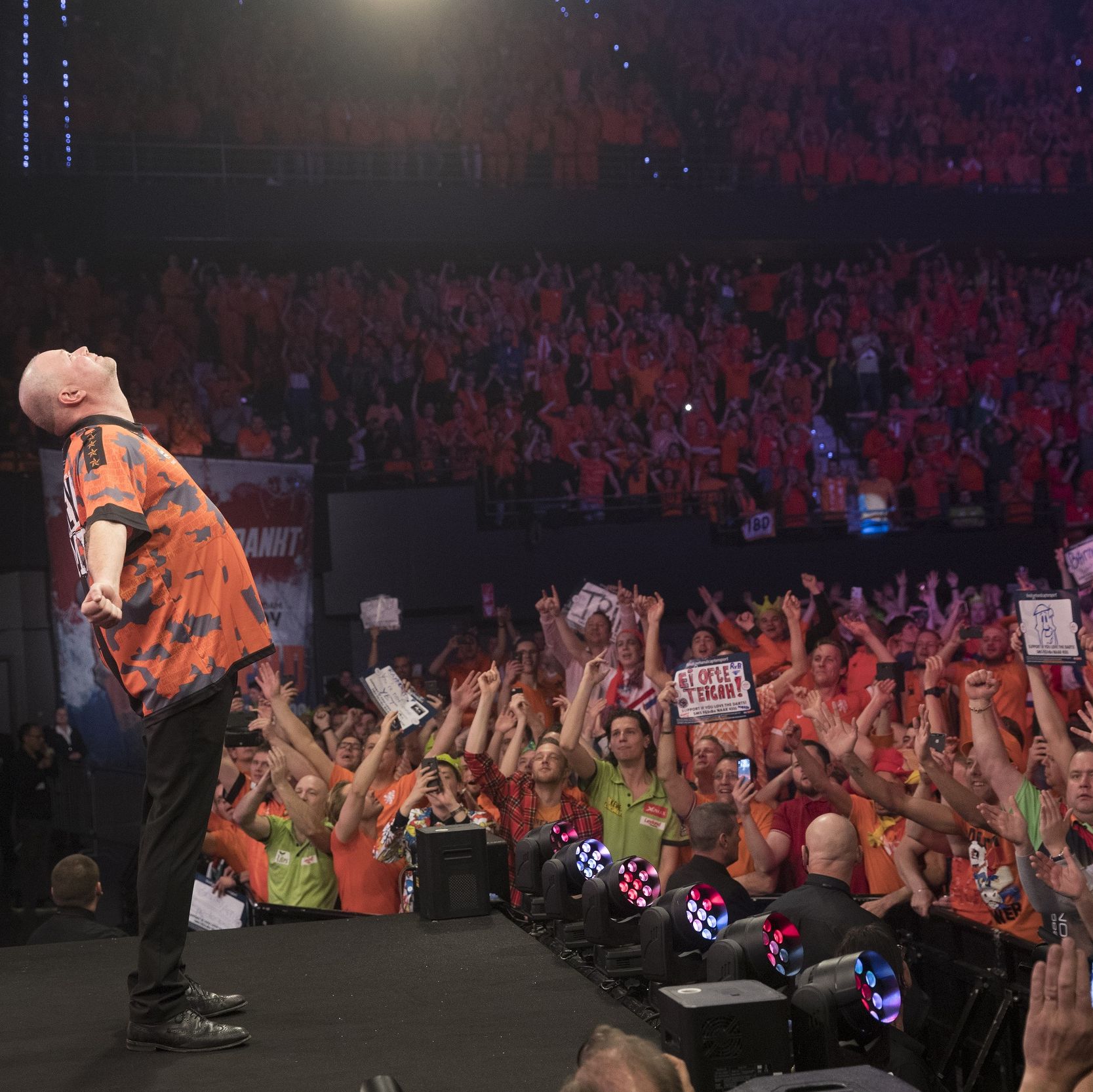 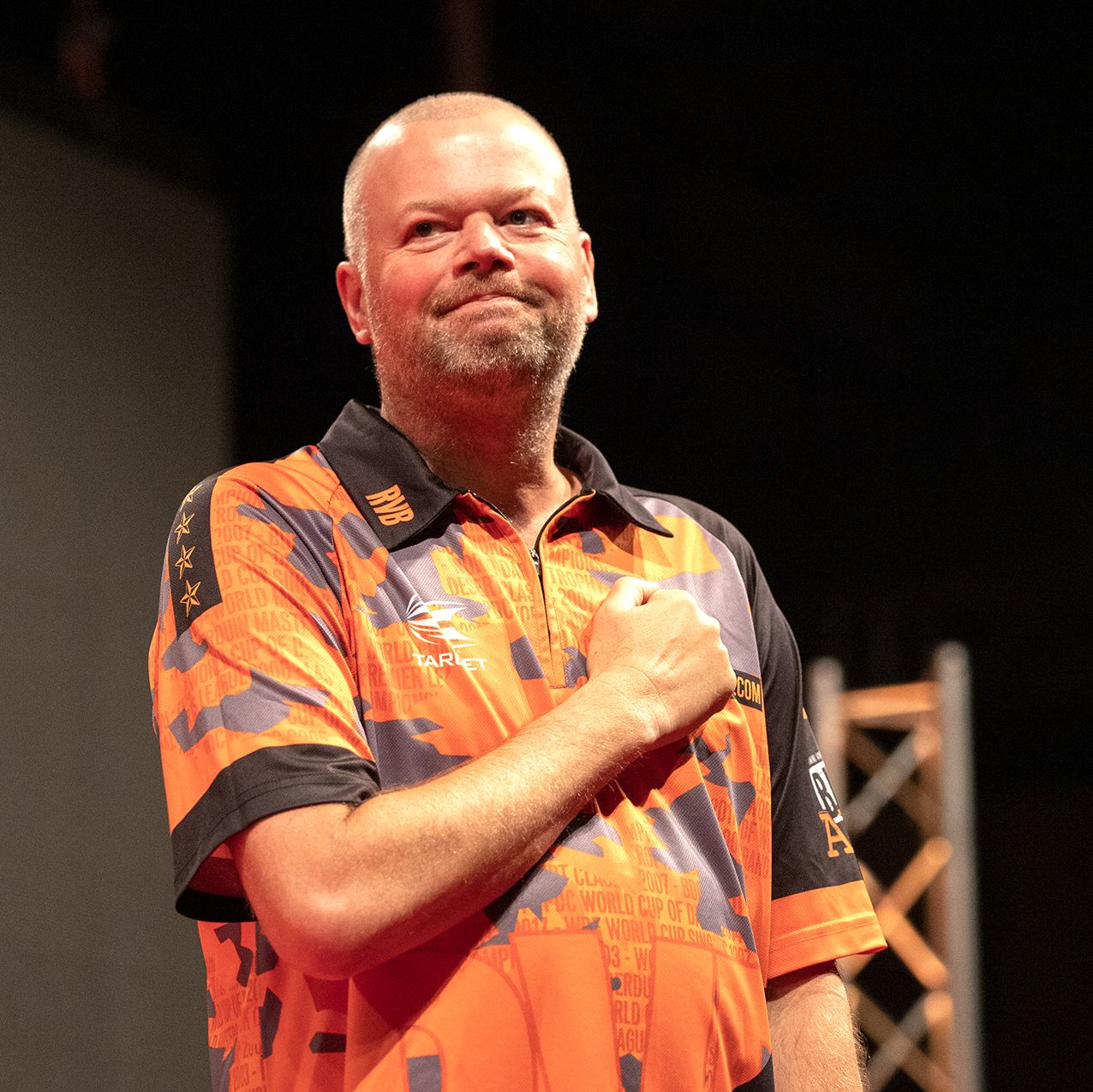 In 2017, 2018, and 2019 the Premier League came to the Netherlands for the first time. Ahoy Rotterdam was the theatre for the Barney Army to show their appreciation for Raymond. "Barney" would remain undefeated in his Ahoy Rotterdam until 2019.